For security, click here to clear your browsing session to remove customer data and shopping cart contents, and to start a new shopping session.

Search for an item by using a photo.

Search for an item by scanning a barcode

Search for an item by using a photo.

You will be taken automatically
to your search results.

Your speech was not recognized

Click the microphone in the search bar to try again, or start typing your search term.

We are searching now

Your search results
will display momentarily...

You may only compare up to four items at a time.

Your session is about to timeout due to inactivity. Click OK to extend your time for an additional 30 minutes.

Your current shopping session will get automatically reset in seconds.
If you are still active user then please click "NO"

Why is this information important?

Changing your store affects your localized pricing. This includes the price of items you already have in your shopping cart. Are you sure you want to change your store? 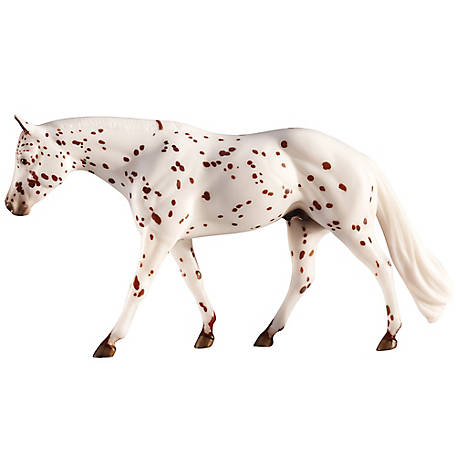 
,
Check Availability at Other Stores
Standard Delivery Not Available to
Notice: This item will ship within 0 days.
This product may require up to 0 additional days for order processing prior to shipping.
Change Delivery Location
See Recommendations

THIS ITEM HAS BEEN SUCCESSFULLY ADDED.

Appaloosas are noted for their unique spotted coats and Lil' Ricky rocker doesn't disappoint! The flashy 1992 Leopard Appaloosa Gelding made his show debut at age 3, but then clicked and was given little chance of survival. Not only did Ricky pull through, he came back the next year to become the reserve world Champion in junior reining! Ricky has had success is many different classes, including earning several National and world Championships in Appaloosa heritage. In this exciting class, stages of the breed's rich history are portrayed with the horse and rider costumed to represent anything from native Americans to Spanish Conquistadors! Model measures 12. 75 in.L x 6. 5 in.H. from the Manufacturer: Breyer is the maker of the world's finest model horses! Since 1950, Breyer has brought a wide range of horse breeds from around the world to life for play and collecting - including real horse heroes like racehorse Secretariat, Olympian Valero, and reining superstar Big chef to Cash! The Traditional Series offers an unmatched level of realism and attention to detail that is appreciated by children and adults alike. Each 1: 9 scale model is meticulously hand painted in rich colors, so no two are the same. Breyer has an incredible community of model horse fans, artists, and collectors, and is proud to host Briefest: a three-day extravaganza for horse lovers and Breyer enthusiasts each July in Kentucky! Bring home a Breyer model, and let your imagination run free! Breyer Traditional Series: what started 69 years ago with a model horse created to decorate a clock has since become Breyer most iconic series, the one that revolutionized the Hobby and still dominates the market. Sculpted in every color and breed imaginable, with unmatched realism and breathtaking hand painted detail, Breyer Traditional Series (1: 9 scale) is a longstanding favorite among children and adults the world over. Fans who play with these beloved models can build entire worlds around them with realistic accessories like barns, fencing, tack, trailers and even riders. about Breyer: The Breyer Promise - the Breyer "promise" is the commitment we make to you, Our fans. with Breyer, you are getting a real horse of your very own. Whether a traditional best-seller or brand-new product, every Breyer Horse is created by hand, under the watchful eye of the world's leading equine experts. Our commitment to high quality material and hand crafting mean that just like in nature, no two Breyer models are exactly alike. Because nothing is as magical as having a horse of your very own. Quite simply, we want to help everyone discover how inspiring horses can be.

To see the price:
Depending on the manufacturer, you will need to add the item to your cart and perhaps begin the checkout process. You will not be required to complete the purchase. You can remove it from your cart at any time.

Why don't we show the price?
Some manufacturers restrict how we may display prices. In some cases the manufacturer does not allow us to show you the price until further action is taken.